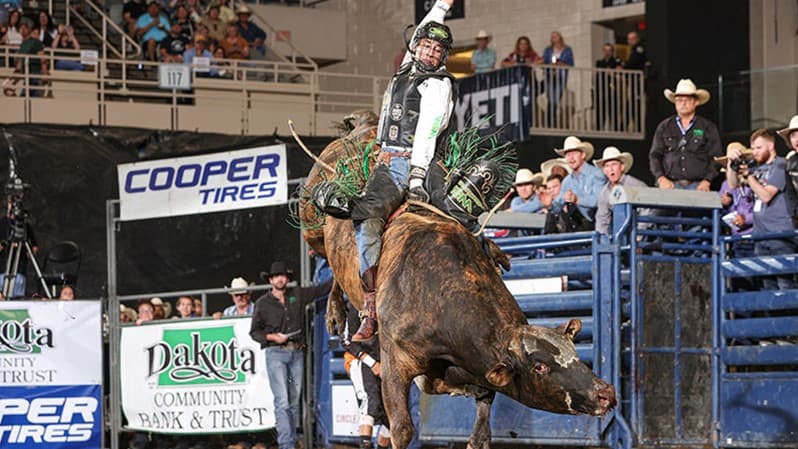 BISMARCK, N.D. – History was made tonight in Bismarck, ND, when bull riders joined teams to compete in five-on-five bull riding games in four preseason matchups in the PBR Team Series – a new league of eight bull riding teams from across the country competing for a national championship.

The preseason for the inaugural PBR Team Series season got underway at Bismarck Event Center, with high-scoring rides in each game this evening.

With the bulls dominating Game 3 of the Dakota Community Bank & Trust PBR (Professional Bull Riders) Bull Riding Challenge, two qualified rides were enough for the Kansas City Outlaws to roll to their first preseason win in shutting out the Nashville Stampede 177-0. Marcus Mast (Middlebury, Indiana) earned the first qualified ride of the night aboard WSM’s Sun Country (WSM Auctioneers/Clay Struve/Dakota Rodeo/Chad Berger) for 87.5 points. 2019 PBR Rookie of the Year Dalton Kasel (Muleshoe, Texas) followed up with the second and final 8-second ride of Game 3 for 89.5 points, bringing the Outlaws to a 177-point lead and their first preseason win.

“Teamwork,” said Kansas City Outlaws Head Coach J.W. Hart. “The player tonight, for me, was Marcus Mast. What he went through the last two months to get to where he’s at, to go through training camp the way he did and perform here the way he did under pressure trying to earn a spot…he made his spot.”

“It was awesome being a part of this. I am super proud of everybody and how hard they tried,” added Dalton Kasel. “I’m so thankful for our Coach, and I have been blessed with an amazing team.”