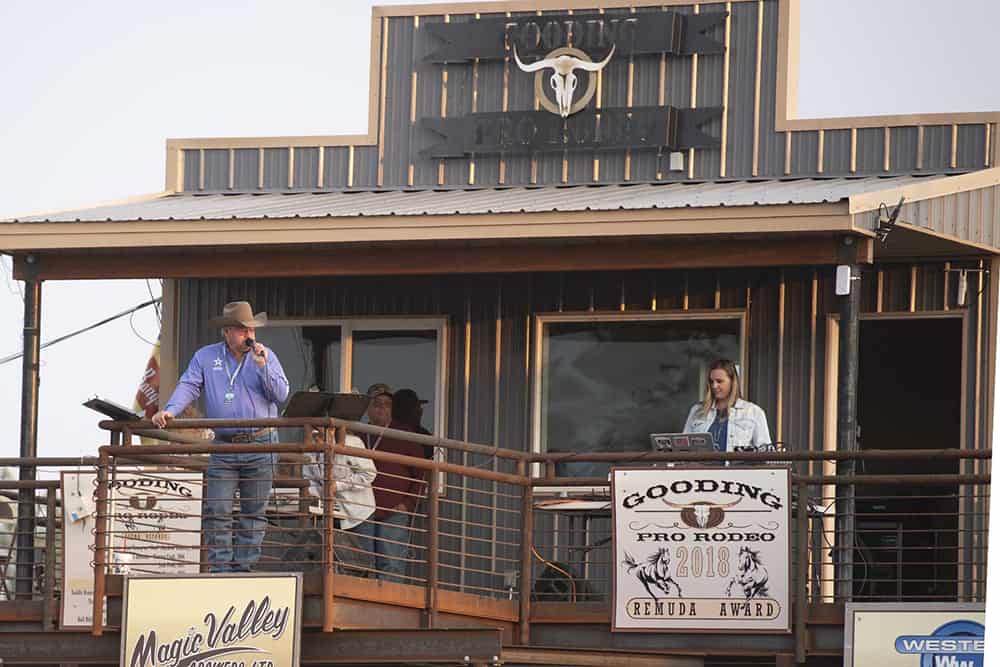 Steve Kenyon, left, has served as the announcer for the Gooding Pro Rodeo for 21 years. This rodeo feels like home to him, and it should. He has a wealth of talent and information.
(PHOTO BY W.T. BRUCE)

GOODING, Idaho – Steve Kenyon is from Oregon, lives in Texas and makes Gooding his home for about a week every August.

It’s a great place to be for a man with one of the most recognized voices in rodeo. Now in his 21st year announcing the Gooding Pro Rodeo, Kenyon looks forward to his annual visit.

“When I first started going to that rodeo, it was just a small-town rodeo,” he said. “Every year, Don Gill does the right things to make that rodeo better, little things, little improvements. When he got to the point where me showing up with a sound system wasn’t adequate, he hired Jill (Franzen) Loden.”

Loden has been handling sound at rodeos for better than a decade, and she’s a two-time winner of the Music Director of the Year. Some of that is because of the work she does at the Gooding Pro Rodeo, set for Thursday, Aug. 18-Saturday, Aug. 20, with a special “Beauty and the Beast” performance set for Wednesday, Aug. 17. All performances take place at 8 p.m. at Andy James Arena.

“In my opinion, hiring Jill was the single best thing Don’s done,” Kenyon said of Gill, the fair and rodeo’s manager. “The electricity and energy that she provides in that place is just unbelievable.”

The rodeo has been nominated for the PRCA’s Large Outdoor Rodeo of the Year and is often recognized for its rambunctious crowd.

“For a small town and a small county – the city has about 3,000 people and the county has roughly 15,000 people – this is a big-money added rodeo,” Kenyon said. “That rodeo adds equal money in breakaway roping.

“It attracts every single big name in rodeo. A lot of the guys have gotten to be known in the community by doing little things like going down to the local Stampede Burger and signing the wall and doing things around the community like that.”

What makes a great rodeo? World-class competition is a good start, and Gooding has that. There also has to be a level of entertainment, and organizers and volunteers work to make sure that happens. They want everyone involved to get the most bang for their entertainment dollars.

Kenyon has experienced that over the last two decades, all while watching the Gooding Pro Rodeo blossom into the spectacle it is today.

“This is one of the most unique rodeos in the PRCA,” he said. “It’s not just the contestants; we get the top 15 in each event. It’s not just because of the stock; we bring in three of the premier stock contractors in ProRodeo with Summit, Korkow and Mazca.

“It’s because of that crowd. That crowd is incredible. I don’t know if it’s legal or sanitary, but there’s a little group that sits in that spot where the contestants know. A guy could jump out and ride for 85 or 90 points or a guy could have an ugly dismount and be 72 points, and they’ll hold up the sign that says ‘Beer Worthy,’ and guys are trotting over there to get a free chug.”

It just adds to the experience.

“The people in Gooding have so much fun, and they are so into this event,” Kenyon said. “The rodeo is a major part of the little fair in Gooding. I think the rodeo has become the major identifying factor of the community.”

That says something about the residents and about the town’s rodeo. Cowboys from all across the country will make sure to put their names in the hat to compete in Gooding.

“I hear it all the time: ‘I’m not going to miss Gooding,’ ” Kenyon said. “The contestants like Gooding. They like the fact that they have great contestant hospitality and the caliber of stock that Gooding gets. They don’t have a concern over the arena or ground conditions.

“The people in Gooding put on a first-class event. The rodeo is almost on a Wrangler National Finals Rodeo level when it comes to livestock. So much of what is done in Gooding is to make it a top-flight production, and the contestants can win some good money and have fun.”

When it comes to the Gooding Pro Rodeo, the sentiment from one person to another seems to be the same.

“That crowd makes it the most entertaining few days of rodeo you’ll ever experience in your life,” Kenyon said.