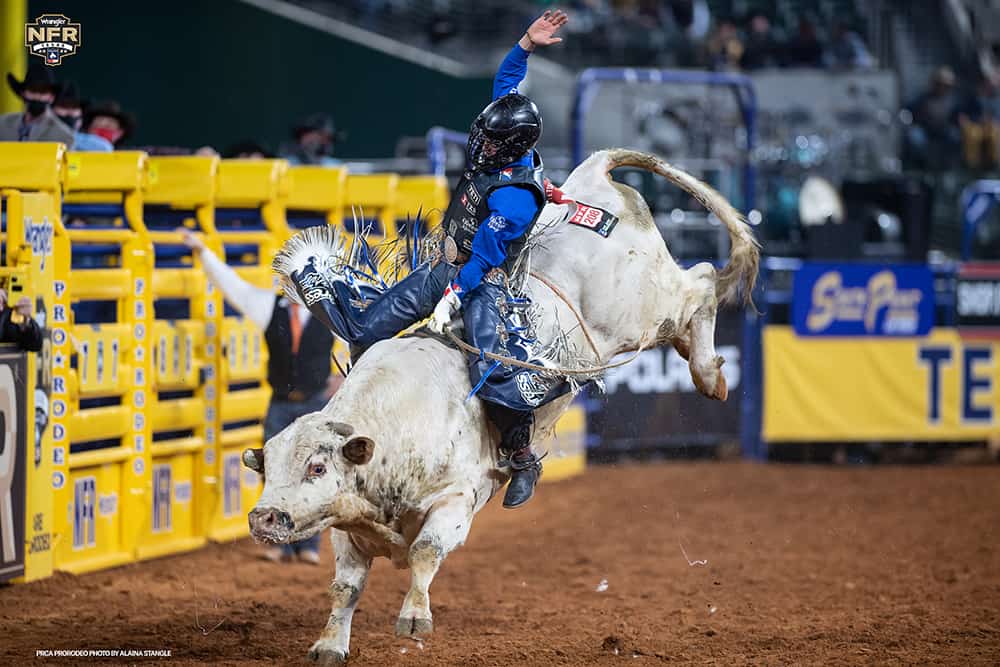 Stetson Wright, shown riding in the 10th round of the National Finals Rodeo last December, will be one of a number of top-name cowboys competing this week at the Lea County Fair and Rodeo. Wright, who has won the last two all-around world championships, also claimed the bull riding gold buckle in 2020. (PRCA PHOTO BY ALANA STANGLE)

LOVINGTON, N.M. – Not only will the top two bull riders in the PRCA world standings be in this southeastern New Mexico community for the Lea County Xtreme Bulls on Tuesday, they will return to Jake McClure Arena the following night for their shot at the Lea County Fair and Rodeo title, too.

The rodeo, which will begin at 7:30 each night beginning Wednesday, will feature four performances and most of the top contestants in the sport through Saturday. But that opening night will be a battle between the No. 1 bull rider, six-time world champion Sage Kimzey, and the reigning world titlist, Stetson Wright, who also owns the last two all-around gold buckles.

Both cowboys know, though, that their fight will be with the livestock they’ve been matched with by a random draw, and they’ve drawn deep. Both men will be matched with bulls that haven’t been ridden this year: Kimzey will attempt to ride Stace Smith Pro Rodeo’s Cowtown, while Wright will try his hand with Harper & Morgan Rodeo Co.’s Little Willie.

They’re just two of the featured match-ups fans can expect to see inside the historic arena in Lovington. Wright will also have his hands full in saddle bronc riding, lifting his rein and spurring Pete Carr Pro Rodeo’s Black Knight. Also in bronc riding, two National Finals Rodeo qualifiers will be matched together Thursday night when CoBurn Bradshaw tries his hand with Carr’s Gold Coast.

Jacobs Crawley, the 2015 world champion, will try to spur NFR bucking horse Mike & Ike, a bronc that’s been on the winning end inside Jake McClure Arena. That same night, two-time world champion Taos Muncy of Corona, New Mexico, will try to hang on to Carr’s Dirty Flirt, a bucking beast that has been hard to conquer for several years.

Richmond Champion, a six-time NFR qualifier, will try his hand with another NFR veteran, Carr’s Night Bells. Jess Pope, who won the NFR average title in his first bid to compete at ProRodeo’s grand championship event this past December, will be matched with Carr’s Good Time Charlie.

The powerful sorrel gelding has been half the equation during the last two championship rides in Lovington. Bill Tutor scored 87.5 points to win the title in 2018, and Tanner Aus was 90 on Good Time Charlie to win in 2019.

The red superstar has bucked 13 straight times at the NFR, and he’s just one of dozens of outstanding bucking animals that will be part of this year’s Lea County Fair and Rodeo.