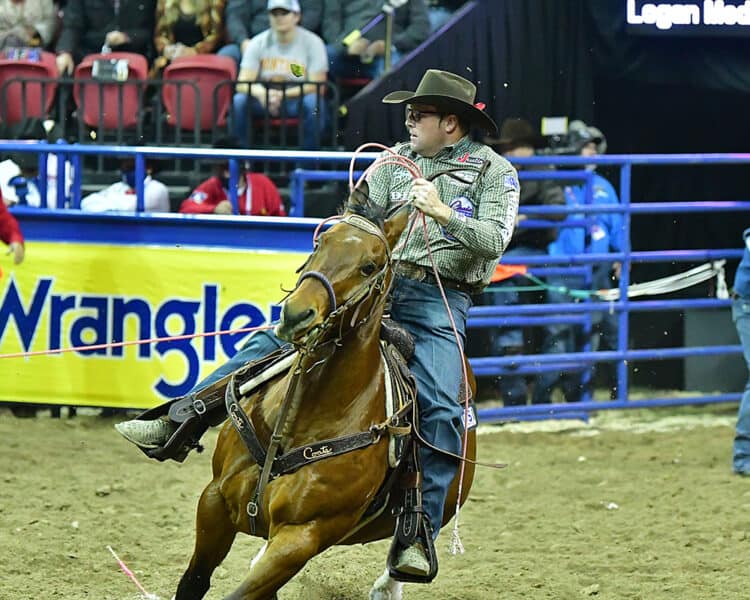 Coleman Proctor turns his steer for heeler Logan Medlin during their 4.2-second run to finish second in Friday’s second go-round at the Wrangler National Finals Rodeo.
(PHOTO BY ROBBY FREEMAN)

As the summer rolled into early autumn, Proctor found himself on the outside looking in. He was doing everything possible to secure his sixth qualification to the Wrangler National Finals Rodeo. He needed to finish the regular season among the top 15 in the heading world standings to do so, and he wasn’t there yet.

By the time the dust settled, he had secured his spot by earning $72,755. He sat 14th in the all-important standings and was Sin City bound again with his wife, Stephanie, and their daughters, Stella, 4, and Caymbree, 2.

There’s a bit of magic dusts that falls around the Nevada desert, and Proctor found it Friday night. He and his partner, Logan Medlin of Tatum, New Mexico, stopped the clock in 4.2 seconds to finish as the runners-up to the round winners, pocketing $21,336 each for doing so.

“We made the same run we’ve been making all year,” said Proctor, 36, of Pryor, Oklahoma. “I came to Vegas this year really excited about us making our runs here. Our run is really smooth, and I think our timing and our rhythm may be the best I’ve had with a partner I’ve had here.

In his first shot, Proctor’s loop got caught up in the steer’s legs, and he and Medlin were saddled with a no-time. In looking at things positively, he even found a way to celebrate the mishap.

“I was really excited for that first round, then chaos hit,” he said. “I headed him, I heeled him, and I made the whistle; who hasn’t triple-crowned on the first night at the NFR?

“A lot of people have made a lot of money on nine steers,” he said, referring to the fact that teams have been able to find ways back into the aggregate race even with a no-time because of all the circumstances surrounding the events at the NFR.

The good news, as he and Medlin proved Friday, is there is an opportunity every day for 10 straight days while they’re in Las Vegas.

“That’s a double-edged sword, though,” Proctor said. “You get to run another steer, but you have to wait until the next night to do it, and if you’ve bobbled, then you’re chomping at the bit to get back to it. The good news is I’m a lot busier in Vegas this year with the pregame show for Purina. I don’t just mope around the room.

“There are times you just want to crawl under a rock sometimes; you listen to a lot of naysayers, and you get out of your rhythm and out of your game. By being busy, it makes you get your sucker out of the dirt really fast.”

In six qualifications, he’s roping with is fourth heeler in Medlin, who made 2020 NFR roping with Charly Crawford.

“He called me last year, and we talked for quite a while about everything,” Proctor said. “I’ve watched Logan for a long time. He was a two-time college champ. He has an amazing horse. He’s an awesome heeler and a great guy to be around.

“The main thing was getting our timing down, and we’ve been able to do that. I’ve proven to the world that he’s absolutely amazing, because he got here. He was trying to get to his second NFR, but his first NFR in Vegas, and his partner is fighting for a back number. Imagine the amount of pressure on him, but he handled it like a champ.”

Now that he’s arrived in the City of Lights and has his daily routine set, all that’s left is putting together a performance to remember and enjoy this special time with his wife and daughters.

“I got a little emotional that first grand entry,” Proctor said. “Looking up in the stands and seeing my baby girls, it got to me, and I realized that I don’t know how many more of these I’ll get to enjoy.

“We may as well enjoy it now while we can.”