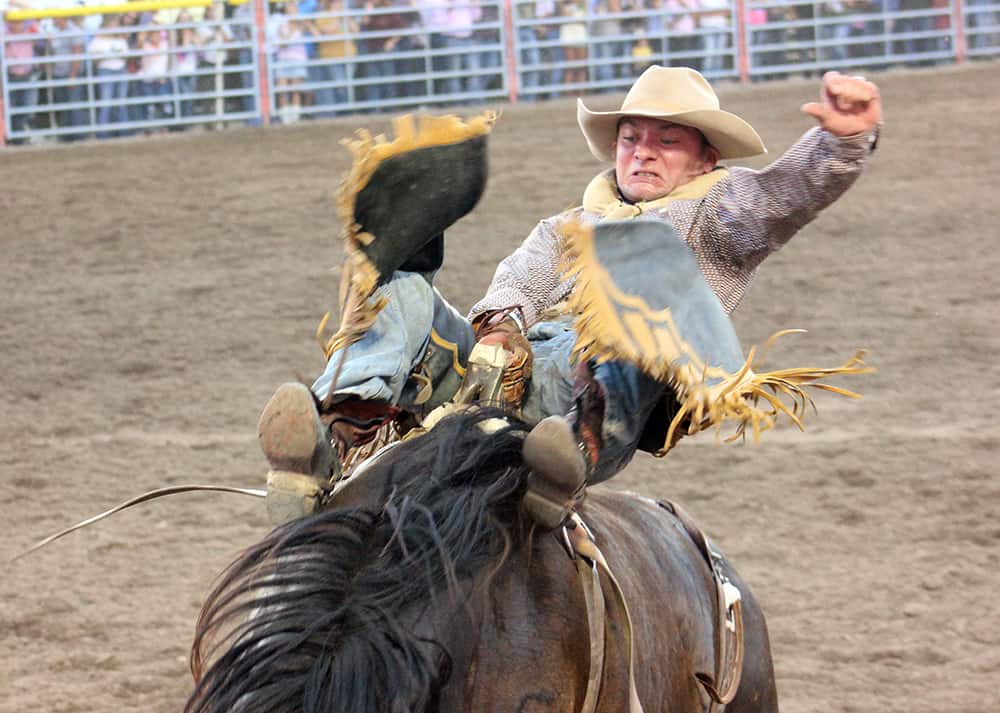 That was 2002, the same year the Gooding Pro Rodeo returned to its status with the PRCA, the premier sanctioning body in the sport. In the 20 years since, both Lowe and the rodeo have become household names to those that care about the game.

He and many others will see it again at this year’s event, set for Thursday, Aug. 18-Saturday, Aug. 20, with a special “Beauty and the Beast” performance set for Wednesday, Aug. 17. All performances take place at 8 p.m. at Andy James Arena.

“If you look to see where they were eight or nine years ago and see how it’s changed, nowadays it’s one of the biggest rodeos to go to in August,” he said. “It’s one you want to go to.”

Over his storied career, Lowe has 15 NFR qualifications. He won rodeo’s gold in 2003, 2005 and ’06, and he’s been “beer worthy” on multiple occasions when he’s ridden in this southern Idaho community.

“I was there at the beginning for the beer worthy stuff,” he said with his trademark grin. “If somebody goes to hand you a beer across the fence, you don’t say no. So, I hammered some lady’s beer down.

For men who ride bucking horses for a living like Lowe, having three of the premier stock contractors in rodeo helps. He is assured a good chance at good money, and that’s all he can ask for. In Gooding, Summit Pro Rodeo, Korkow Rodeo and Macza Pro Rodeo all work together to help showcase big-time bucking animals.

“They just keep bringing better stock, and the committee there works so hard to keep building things better,” Lowe said. “It shows how much work they put into it. They should be extremely proud of what they have to show for it now.”

“It has a wild crowd, and you can’t miss the beer worthy section,” said Bennett, a nine-time NFR qualifier. “It’s the icing on the cake. They scream. They’re top-end supporters of us cowboys. That beer worthy section is something special at Gooding.

“That rodeo’s come a long way the last few years. It’s got an unreal crowd, great stock and it’s a fun environment.”

Yes, cowboys make their livings in eight-second increments, but it takes more than money to drive them to about 100 rodeos a year. They want the whole experience to pay off in a positive way, and finding fun is a good way to make it happen.

Gooding provides that in many ways.

“I promise you there are not a lot of crowds that are anything like the Gooding Pro Rodeo crowd,” said team roping header Coleman Proctor, a six-time NFR qualifier from Pryor, Oklahoma. “They stay up until 1 in the morning watching slack after the performance, staying the whole time. They give you a bottle of whisky if you get the victory lap. It’s like nothing I’ve ever been part of, and we look forward to it every August.”