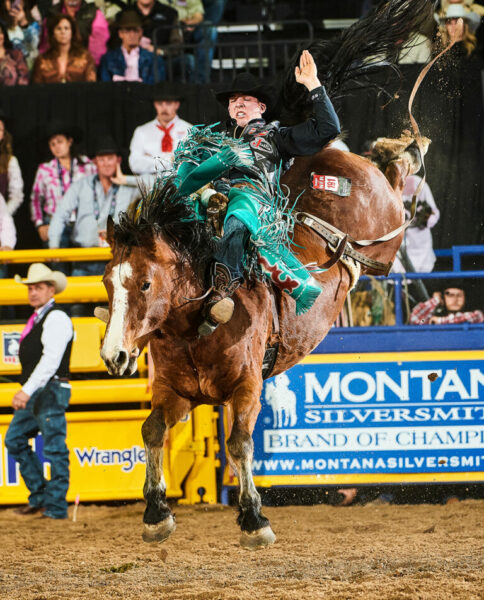 Jess Pope rides Summit Pro Rodeo’s Game Trail for 88 points to finish second in Monday’s fifth round of the Wrangler National Finals Rodeo. Pope has placed in all five rounds so far and sits atop both the average and world standings.
(PRCA PRORODEO PHOTO BY CLICK THOMPSON)

J.R. Vezain never won a gold buckle, but he qualified for the Wrangler National Finals Rodeo six times, the last after he suffered a catastrophic back injury while riding a bucking horse in September 2018 at Pasadena, Texas. He walks with the assistance of a robot but otherwise is paralyzed from the waist down. He is the perfect example of a champion in life.

“I said, ‘We’re blessed,’ he said. “I have the best job in the world. I get to compete in front of 17,000 people every day here. All year long and all the places I see and the people I get to meet … you can’t take that for granted. We’ve got a guy sitting in our locker room, J.R. Vezain. He is a perfect example that it can be taken at any point.

“It brings tears to my eyes just to think about that, because he’s such a great guy. He handles it so well. It’s hard to explain, but it’s cool to see him down there still enjoying life.”

Pope is enjoying his life. On Monday night, he rode Summit Pro Rodeo’s Game Trail for 88 points to finish second in the fifth go-round. That was worth $22,851 and pushed his NFR earnings to $102,804.

He’s also not taking is position atop the world standings for granted. He has the best aggregate score of 432 points on five rides (an average of 86.4 points per ride) and owns a $54,717 lead in the world standings over the No. 2 man, Wyoming cowboy Cole Reiner.

“It’s always good to show up to Vegas and win money,” said Pope, of Waverly, Kansas. “This is where we ride for the most money all year long. There is no place else we can nod our heads for $28,000 a day. It takes a lot of rodeoing throughout the year, and that is what lot of people don’t understand. It took me to go out and rodeo like we do to understand what it costs.

“You start buying plane tickets, hotels, three meals a day, all your equipment, and you’re also paying entry fees, paying uber drivers and everything. It takes a lot of money to get going, so it’s nice to come here and put some money back in your pocket.”

That’s not all. In rodeo, dollars equal championship points, so the contestants in each event who finish the year with the most money in their accounts will be crowned world champions. Pope has been close before. He finished the 2020 season third on the money list, then placed second last season.

Even though he’s in the middle of a world-title race, he doesn’t let it change him. He shows up to the arena ready to go to work. With Vezain in the room before they ride, Pope sees just how special this moment is.

“J.R. makes me strive to be a better person every day,” Pope said. “Everyone needs a little bit of J.R. in them.”