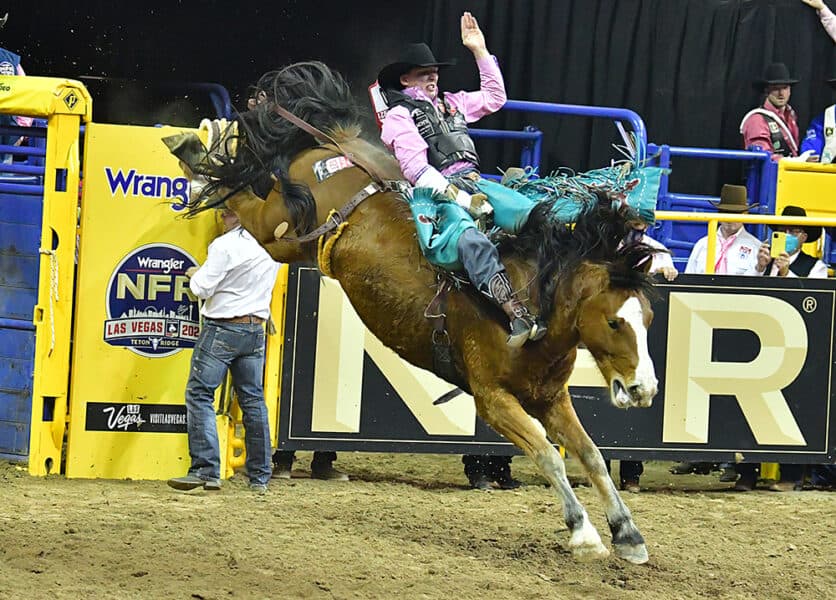 Jess Pope rides Cervi’s Organic Outlaw for 86.5 points to finish in a three-way tie for sixth place in Monday’s fifth round of the Wrangler National Finals Rodeo.
(PHOTO BY ROBBY FREEMAN)

He finished out on the money Sunday, then took his smallest paycheck of the week by finishing in a three-way tie for sixth place during Monday’s fifth round.

Yet, he’s still smiling. He knows he’s riding well and taking the opportunities as they come. On Monday night, he rode Cervi Championship Rodeo’s Organic Outlaw for 86.5 points, pocketing $1,451.

“Money is money,” said Pope, 23, of Waverly, Kansas. “I just had to make due with what I had drawn. I didn’t even figure I’d win a check tonight. There were just a lot of great horses. I just did my job, and the horse did more than I what I thought he was going to do. It worked out good.

“Every dime you win out here is better than nothing.”

He’s done his fair share of winning. He’s placed in four of five rounds and has earned $81,556 so far. He is third in the world standings and still has the second half of the NFR ahead of him.

“You just have to take it one horse at a time,” he said. “You can’t beat the draw. I don’t think I’ve drawn worth a (darn) the last two days. The horse (Sunday) was weaker than anyone else’s in the pen. My horse (Monday) was great, but when you look down the list and compare it to the Pickett and Calgary horses, it was a little step below what everything else was.

“It’s part of it. My job is to ride bucking horses. I didn’t get here accidentally. There are five more rounds, and anything can happen.”

Life’s a bit different in Las Vegas than they are back home in rural eastern Kansas. He’s adjusting, and he’s got his support system to help through every step. His parents, Bret and Jennifer Pope, are staying at a campground in Sin City, and they’re at ever, performance cheering on their son each night.

“It’s nice to have my whole family out here,” Pope said. “I get to hang out with them whenever I can. If I have a spare minute, I can run out there to the campground. It makes it feel more homey. There’s really not a lot of homey feelings living in a hotel room in Las Vegas, Nevada. Honking horns, sirens going 24/7 … that’s not what I’m used to. It’s nice to get away and just hang out and get away from all this.”

It’s helping Pope find success in a big way at ProRodeo’s grand finale. He has pushed his season earnings to more than $190,000 and has five more nights to add to it.

That’s why he’s in Las Vegas this week. It’s why he straps himself to a bucking horse and rides for eight seconds at a time. This is his way to hit a jackpot in Nevada, and he’s doing a bang-up job of making everything happen.