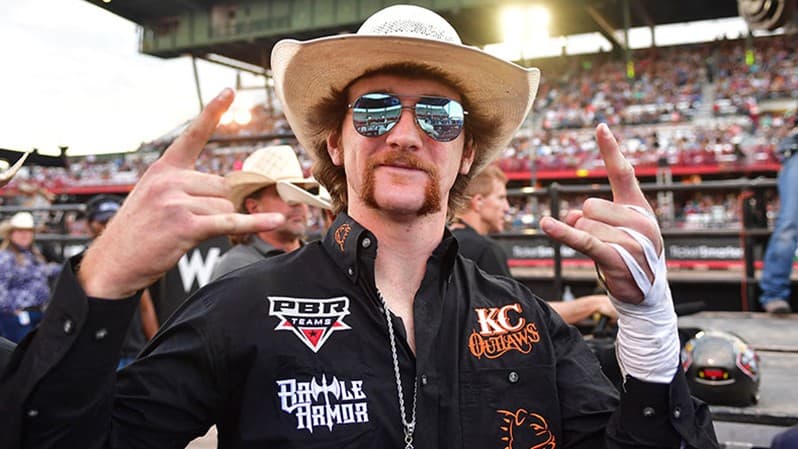 PUEBLO, Colo. – The Kansas City Outlaws were minutes away from squaring off against the Ariat Texas Rattlers in Cheyenne, Wyoming, last Tuesday when Bob Mitchell used his right leg to kick a hacky sack towards fellow teenager Tate Pollmeier near the rider out gate at the Daddy of ‘em All.

The first night of competition saw the Outlaws go 0-for-5 in Cheyenne, but one could hardly tell if nerves would be an issue for the youngest protected roster in PBR Teams (average age of 22.62 years old).

Instead, Mitchell (19) let out a big laugh as Pollmeier (18) stumbled to readjust his body and keep the ball in the air, with Kyler Oliver (23) and team captain Dalton Kasel (23) running to the duo’s aid at the last minute. The Outlaws were being their relaxed selves and not letting the weight of the moment bear down on them.

“I was pretty nervous about the whole Teams deal at first,” Mitchell admitted to PBR.com before the Outlaws’ 173-85.75 victory over Texas. “I didn’t know how it was going to be, but now that we’ve started up and gotten the first couple under our belt, I think it’s going pretty good – and we’ve got the youth on our side too, so we’re all feeling pretty good, pretty healthy. And especially once Kyler gets back, we’re going to be a handful.”

Hacky sack was a big part of Mitchell’s 2022 Rookie of the Year campaign. Of course, there is no correlation between hacky sack and riding a 1,500-pound beast for 8 seconds. However, Mitchell was often the youngest rider in the locker room on the Unleash The Beast, and he was tasked with learning how to handle the pressure that comes with contending for a Rookie of the Year title.

Mitchell would often sneak away from the Unleash The Beast locker room and find a corner to knock around his hacky sack and not dwell on the pressure that can come with being a new face in the PBR.

That experience has helped Mitchell be more prepared for this coming weekend’s Outlaw Days in Kansas City, Missouri, where the home crowd inside T-Mobile Center will be looking for big things from its team, including its native rider, Mitchell.

Mitchell got started the sport at 11 years old by his brother, Matt. He quickly fell in love with the battle of man vs. beast while growing up on an Angus farm in Steelville, Missouri, four hours away from Kansas City once his family sold their mechanic shop in Ohio and relocated.

A journey that started on a stationary barrel quickly evolved into getting on mini-cows and then local youth rodeos throughout Missouri.

The Outlaws face the Ridge Riders live on RidePass on Pluto TV Friday at 8:45 p.m. ET. KC’s game against Nashville is this weekend’s CBS Game of the Week and will air Sunday on CBS national television at noon ET.

Unlike the Unleash The Beast, Mitchell will not be feeling the weight of the home crowd on his shoulders alone. Instead, he has multiple teammates by his side, including childhood friends Pollmeier and Koltin Hevalow, and a tough-as-nails head coach in J.W. Hart, who has the utmost confidence in his team.

“It still boils down to you just staying on your bull, so it’s the same thing, and you have to keep the same mindset,” Mitchell said. “Yes, you’ve just got the whole team’s weight on your back, so now you’ve got a little more pressure, a little more something to make you work harder, but it is also a lot of fun. We’re always playing hacky or doing something together.

“It’s very nice, especially to have guys on your team that you’re good buddies with.”

Mitchell went 14-for-45 (31.11%) in 19 Unleash The Beast events and demonstrated the kind of toughness Hart wants from his riders when he spent the final two months of the season riding with an unstable right shoulder.

Mitchell never used the shoulder as an excuse, nor did he complain about breaking the outside of his foot at the 2022 Pendleton Whisky Velocity Tour Finals.

Every step of the way, the goal was to make sure he walked out of Dickies Arena in Fort Worth, Texas, as Rookie of the Year no matter what.

“It was a long road here, a lot of ups and downs, but we finally made it,” Mitchell said inside Dickies Arena with the Rookie of the Year belt buckle in his hand. “I didn’t have the Finals I planned. I was kind of beat up. I did not want to get zeroed at the Finals. To get the one rode felt good. But I guess I just did good enough all year to help me win Rookie of the Year.

GIVE MITCHELL A SPICY BACON BURGER

Kansas City is home to some of the best barbeque in the nation, and Mitchell is not a guy to shy away from some good food, but you won’t find him eating a big meal on game day this weekend.

“I don’t really like to have a full stomach before I get on,” Mitchell said. “Makes me feel too heavy.”

However, during the World Finals, Mitchell did give himself a break and chowed down on a nice spicy bacon cheeseburger from Whataburger following Round 7.

One thing is for sure – no matter what the KC fans are consuming this weekend, Mitchell expects the fans to be loud.