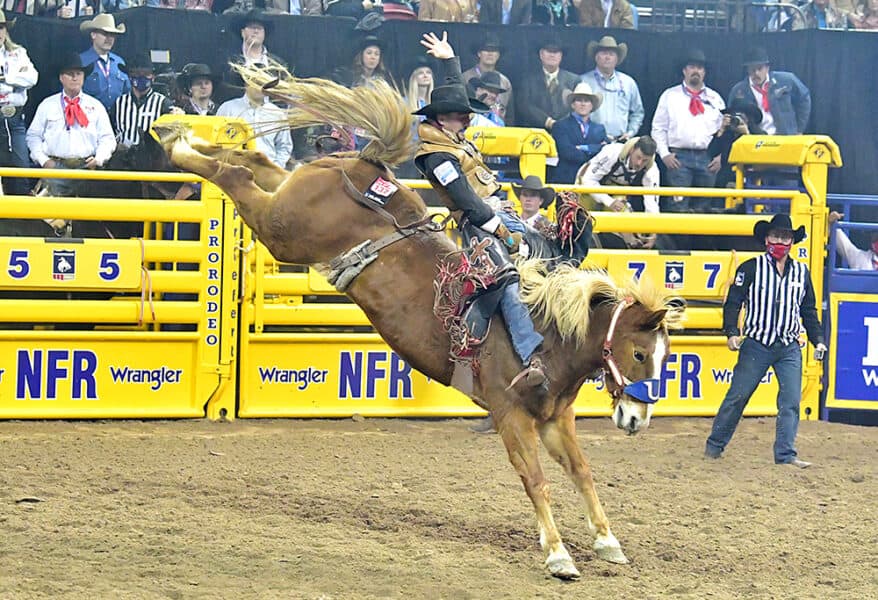 Garrett Shadbolt rides Flying U Rodeo’s Lil Red Hawk for 85.5 points to finish in a three-way tie for third third place in Tuesday’s sixth round of the Wrangler National Finals Rodeo.
(PHOTO BY ROBBY FREEMAN)

He’s strapping himself to 1,200 pounds of bucking dynamite every night of this Wrangler National Finals Rodeo. His riding arm’s a bit sore, but that comes after six nights of ProRodeo’s grand finale. He’s still smiling and still excited to be part of this elite field of cowboys for the first time in his career.

It certainly doesn’t hurt that he’s placed in half the go-rounds so far, with the most recent being an 85.5-point ride on Flying U Rodeo’s Lil Red Hawk to finish in a three-way tie for third place Tuesday night. That was worth $11,466.

“I’ve seen Lil Red Hawk; the first night, Kaycee Feild had her,” said Shadbolt of Merriman, Nebraska. “She didn’t kick over her head every jump. I was hoping she would do a little more for me, and I felt like she really did. About the third jump, I was straight up and down, looking straight down.

“Honestly, she was kind of a lot. I think people think that horse is (really rider-friendly), but today felt like she really bucked. She didn’t have any big moves, but she was kicking hard.”

“Everything is feeling really healthy,” he said. “My riding arm is getting sore, but that’s part of it. I’ve got some ice, a little bit of a preventative. I will be good as gold tomorrow.”

Years ago, cowboys were as wild and crazy as the brands for which they rode. These days, though, cowboys are more athletically prepared. They train and prepare their bodies for battle. When one makes a living eight seconds at a time, it’s imperative.

“I’ve been warming up a little at 3 o’clock (in the afternoon), trying to get a lot of sleep and eating good. I’ve jumped into a really icy pool a couple of mornings. Maybe it makes a difference; maybe it just makes me feel tough.”

He laughed a little.

“It’s pretty cold out here in Vegas to be swimming. I haven’t been doing anything too crazy, just getting the blood pumping and stretch out in the mornings and before I come to the Thomas & Mack.”