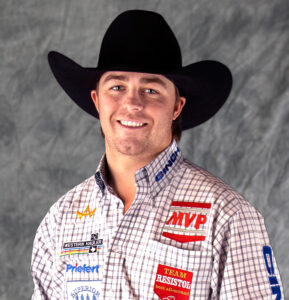 Fun Facts about Wyatt: He loves horses, from saddle horses to bucking broncs. Wyatt’s wife Lesley is a barrel racer and they work with young horses together. He was born in Minnesota then his family moved to Balko, Oklahoma. World champion Robert Etbauer helped him get started riding bucking horses. He had been roping but found that he really liked saddle bronc riding. He won the College National Finals Rodeo title in 2016 for Clarendon (Texas) College where his coach was WNFR saddle bronc rider Bret Franks. He qualified for his first WNFR in 2020 and finished as the reserve champion. He was in the top five of the world standings until he injured his hamstring. He missed the last two months of the season but is still headed to his third consecutive WNFR where the family will also celebrate daughter Cheyenne’s birthday. They have a son, Cooper who is four and Cheyenne will be three.