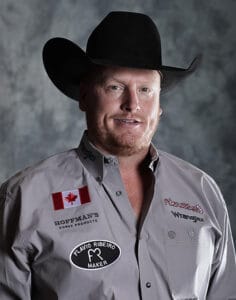 Fun Facts about Curtis: He is on track to go over $2 million in career earnings and could accomplish that very easily at this year’s WNFR – hue just needs $76,506. His success in the arena always comes down to the horses he rides and owns. The latest is Dashin Haze, “Tyson,” who Curtis and several other contestants rode last year and the year before. Tyson has been selected as the AQHA/PRCA steer wrestling horse of the year two consecutive times. This year, Tyson has also been a big part of Jesse Brown and Scott Guenthner’s success. Curtis comes from a steer wrestling family. His father, Greg and brother Cody, and Curtis have all won Canadian championships. Cody is also a WNFR qualifier. The brothers both competed in 2010.