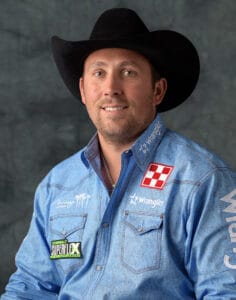 Fun facts about Riley: He had to win first at California Rodeo, Salinas, the Pro Tour Finale to have a shot at his fourth WNFR qualification and that’s exactly what he did. Riley and his wife Megan have a daughter, Chaney Marie and added a son Cruze to the family in May. If 20 years from now, Cruze is steer wrestling at the WNFR he will be the fourth generation of Duvalls to accomplish that. Riley’s grandfather Bill hazed for his great-uncle, the legend, Roy Duvall. Sam, Riley’s father, has been in the steer wrestling box, and the hazing box as well. And Riley has been on both sides. The Duvalls put Checotah, Oklahoma on the map as the steer wrestling capital of the world. Riley is a two-time national high school rodeo champion having won the steer wrestling in 2008 and 2009.