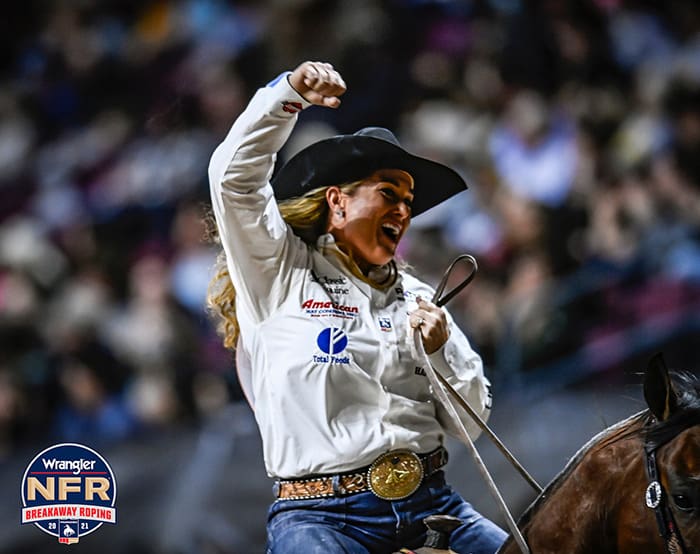 Crawford of Stephenville, Texas, won the first round in a quick time of 1.9 seconds matching her first round time last year. As a result she picked up her second consecutive Betty Gayle Cooper award for the fast time presented by the National Cowgirl Museum and Hall of Fame. It was a goal of hers coming in.

“I started off fast last year and wanted to do the same this year especially since I was coming in further back in the pack,” said Crawford. “I won the Betty Gayle Cooper fast time award last year and that was very special to me, so to get to add another this year is just great.

“I am going to go at them every round this year.” 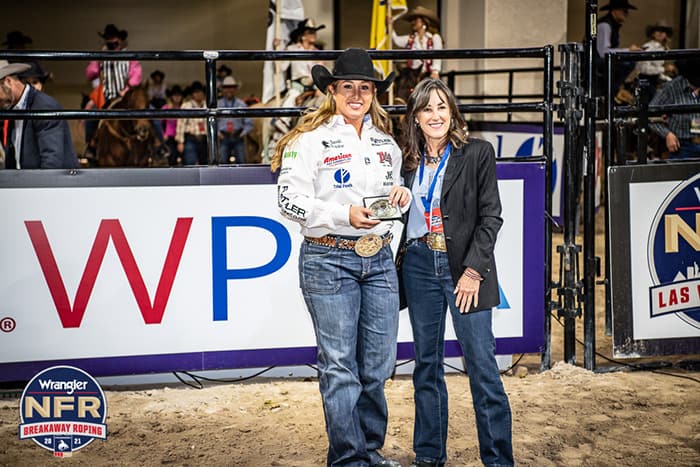 Crawford enters this year further back in the pack coming in ranked seventh. Unfortunately her second round didn’t go quite as well ending with a no time but returned to the top in the third round.

It was a log jam at the top in the second and third round with three ladies tying at the top in each round. The second round was won by all first timers to the NFBR, while the third round all had previous qualifiers atop the leaderboard. Cheyanne Guillory set the bar in the second round and WPRA World Champion Kelsie Chace matched it right after. The last roper in round two Joey Williams wanted to join the party and also stopped the clock in 2.4 seconds.

In the third round, the winning time was 2.1 seconds turned in by Crawford, Lari Dee Guy and Shelby Boisjoli. Crawford set the bar, followed by Guy who owns nine WPRA world titles and Boisjoli trying to win her first. Boisjoli came into the finals ranked No. 1 and is laser focused on adding as much money as she can to her regular season earnings with hopes of leaving here with a little gold.

Joey Williams was lighting fast in the fourth round stopping the clock in 1.7 seconds. Crawford was hot on her heels with a 2.0 second run. Williams entered the Finals ranked 14th but added $4,412 with the round win.

Putting a cap on the first day was former rodeo coach Taylor Munsell winning the fifth round in a time of 2.4 seconds followed by another Taylor – Taylor Hanchey with a 2.6. Hanchey is making her own history this year being the first WPRA member to qualify to the NFR in two different events. Hanchey, whose maiden name was Jacob, first competed at the NFR in 2013 in the barrel racing as well as in 2015. Now she is making headlines in the breakaway roping.

Rounds 6-10 will conclude the event tomorrow starting at 1 p.m. PT. The 2021 WPRA World Champion Breakaway Roper will be crowned following the 10th round along with the average champion.

Watch all the action LIVE and FREE on the Wrangler Network.