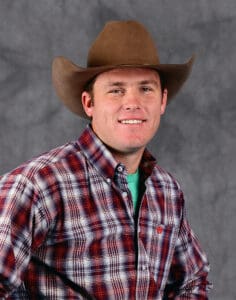 
Fun Facts about Caleb: He won the College National Finals Rodeo All-Around championship in 2010 while attending Wharton County (Texas) Junior College (WCJC). Because of his success in the arena, Caleb was part of the inaugural group inducted into WCJC’s Athletic Hall of Fame. He went on to Sam Houston State University and got his bachelor’s degree in agricultural business. He puts that degree and those college rodeo experiences to use in and out of the arena. Last year, Caleb qualified for his seventh WNFR, but because of COVID he did not get to compete. It’s not the first adversity he has faced and just like every other time, he put one foot in front of the other and kept looking forward. He does that with his wife, Brenna by his side. They have three children. Their oldest son Cru was born just after Caleb won his 2015 gold buckle. Daughter Myla arrived in October before he won his second. They just welcomed another son, Chaz. They are hoping for a third gold buckle to go with a third child.