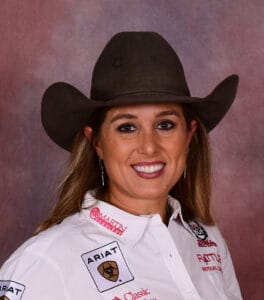 Fun Facts about Jackie: A year ago, they had to modify her saddle so that she could compete while pregnant. She is married to WNFR team roping qualifier (header) Charly Crawford. They have a son, Creed who is four and she gave birth to their daughter, Journey in March of 2021, just three months after competing at the 2020 NFBR at Globe Life Field in Arlington. She spent the first part of her life in Illinois and moved to Oklahoma before she became a teenager. She turned down full ride college scholarships to go to Tarleton State University in Stephenville. She was part of their women’s champion team and has been inducted into their Rodeo Hall of Fame. She graduated with a bachelor’s degree in business that she puts to use ever day. She has had a part in the training in each of the horses that she rides and that gives her a lot of personal satisfaction.