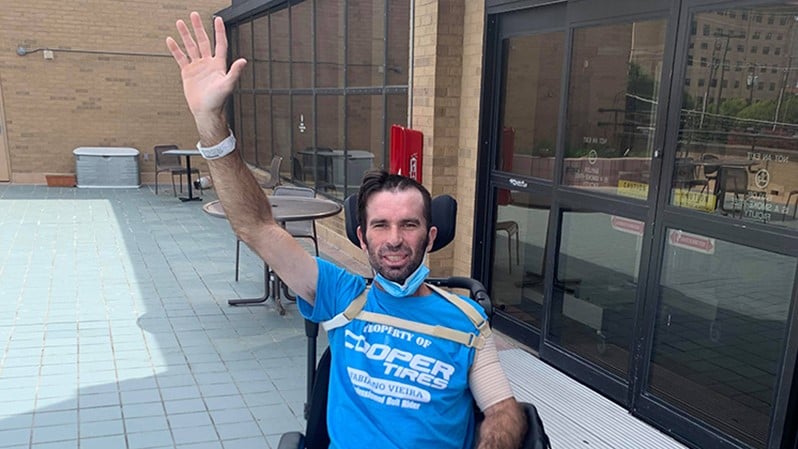 The eight-time PBR World Finals qualifier has begun to walk on his own with some limitations, and his memory from before the accident has returned, Jilian told PBR.com on Friday morning.

“The Baylor hospital team met to review the progress and goals to be achieved by Fabiano after 12 days since rehabilitation began and 37 days in total since the accident happened,” Jilian said. “With the help of professionals, and with the power of God together, and everyone’s prayer, he has been interceding and showing miracles in Fabiano’s life.

“Fabiano is already getting better every day. He can walk and sit with some limitations. He does some of the activities such as cycling a bike (and) climbing stairs. He still has difficulty balancing himself. (His) left arm already shows light movements. He is already able to perform some of the daily activity normally. He is still slowly swallowing, but he is able to eat.

“Memory is better too. He remembers everything before the accident, and his memory after the accident is returning. He is overcoming all necessary barriers and surprising everyone with his faith and perseverance.”

A equipe do Baylor hospital se reuniu para revisar o progresso e metas a serem atingidas depois de 12 dias que ele começou a reabilitação . São 37 dias total que acidente aconteceu .Com ajuda dos profissionais e com poder de Deus juntamente com orações vem intercedendo e mostrados milagres na vida do @fvieirapbr . Ele apresenta melhoras já consegue andar e sentar com algumas limitações , realiza algumas das atividade como pedalar bicicleta , subir escada, tem dificuldade para se equilibrar ainda . O braço esquerdo já apresenta movimentos leves .Ele consegue realizar algumas da atividade diárias normalmente. Ainda está com deglutição lenta mas já consegue comer. Memória já está melhor também, ele lembrar de tudo antes do acidente , a memória depois do acidente já está voltando .Ele está superando todas barreira necessárias e surpreendendo a todos com sua fé perseverança. Feliz que estamos a poucos dias para ir para casa . Gratidão e palavra par tudo que vem acontecendo . Agradeço a todos que estão contribuindo para que ele se recupere logo . The Baylor hospital team met to review the progress and goals to be achieved by Fabiano after 12 days of rehabilitation. It’s been 37 days since the accident happened. With the help of professionals and with the power of God together with prayers he has been interceding and showing miracles in Fabiano’s life. He is already getting better every day, he can walk and sit with some limitations, he does some of the activities such as cycling a bike, climbing stairs, he still has difficulty balancing himself. The left arm already shows light movements. He can already perform some of the daily activity normally. He is still slowly swallowing but he is able to eat. Memory is better too, he remembers everything before the accident, the memory after the accident is returning. He is overcoming all necessary barriers and surprising everyone with his faith and perseverance. Glad we’re just a few days away from home. Gratitude is a word for everything that has been happening. We would like to thank everyone who is directly or indirectly contributing to his recovery soon. Thank you for supporting @westernsportsfoundation @pbr

Doctors elected to perform emergency surgery on one of Vieira’s brain injuries on July 2.

According to Jilian, Fabiano spent 10 days in the ICU as doctors continued to monitor his progress and go through the process of removing him from a medically-induced coma on July 5 and taking out his breathing tube on July 6. Fabiano woke up on July 8, but remained sleepy because of medication he was taking for pneumonia. Doctors transferred him out of the ICU three days later and into a different room as his vital signs began to stabilize. This was also done out of a sense of security with an increase in coronavirus patients in the ICU.

Vieira was transferred to the Baylor Scott & White Institute for Rehabilitation on July 27, and he has since been continuing his road to recovery there in Dallas.

Stock contractor Renato Teixeira and his family, along with bullfighter Lucas Teodoro and his wife, Ingrid, created a GoFundMe for Fabiano and his family on July 16 to help with increasing medical cost for the Vieira family.

Multiple riders and stock contractors have continued to share the GoFundMe and Vakinha fundraisers as they hope to continue to raise aid for their friend.

The Western Sports Foundation is also offering assistance to the Vieira family during this time.

Fans can follow the social media account Favor4Fabiano for additional updates from Jilian about her husband’s recovery.

Friends of the Vieiras are organizing a dinner/live auction to raise funds for the Vieira family on Oct. 11 at NRS World in Decatur, Texas.

Checkout the update @jilianvieira posted on Fabiano and his recovery progress. @fvieirapbr God is good!

Fabiano was the No. 10-ranked bull rider in the world at the time of his injury last month.

Vieira became the fourth-oldest bull rider to win a premier series event this past April when he won the PBR Las Vegas Invitational, presented by Union Home Mortgage at the Lazy E Arena in Logan County, Oklahoma. Vieira concluded the first half of the season 13-for-32 (40.63%) with a victory and three Top-10 finishes.

The Perola, Brazil, native made his PBR debut in the United States in January 2010 and qualified for his first World Finals the following season, beginning a stretch of eight consecutive World Finals appearances in which he became a fan favorite worldwide. Vieira successfully reached the 8-second mark on the PBR’s highest level of competition 301 times.

Vieira was often known for his singing in the locker room, and he has even begun to offer an encouraging tune during his rehab sessions in Dallas to the joy of the nurses and doctors working with him.

Jilian continues to express her gratitude for everyone’s support and prayers in the last month. She cannot say thank you enough, and she is looking forward to her husband’s recovery in the coming days and weeks.

“(I am) glad we’re just a few days away from home,” Jilian said. “We are grateful for everything that is happening. I thank everyone who is helping him to recover soon.”